Here are some deets on the process of getting my license in the UK so you’re not into the nitty gritty, or aren’t planning on moving to the UK anytime soon (totally understandable) feel free to skim this post. But if you’re a curious cat, by all means dig in (meow)

I (Rachel) passed my driving test last month and am pretty pumped about it! I just received my drivers license in the mail am considering framing it 🙂 I would if my picture wasn’t the required level of terrible for such things.

Andrew passed his test back in March after having to reschedule due to a freak snow storm (link). Our US licenses allowed us to drive in the UK for 12 months, requiring us to get UK licenses after March of this year. We both drove our rental car without incident since we arrived in March 2017.

Some friends and acquaintances have seemed surprised that I drive in the UK as many of the expat wives refuse to drive (not sure if it’s fear or disinterest) but I never gave it a second thought. It may be something in my nature:

Full disclosure: even though I’m a confident and arguably good driver it was stressful to drive in the UK initially as it required me to reprogram my brain! Andrew, who had been driving in the UK frequently during 2016, was a good coach and gave me a few tips that helped put my mind at ease.  So when March came to a close it was time to get back in the saddle…

Actually, back in the office chair: the practical exam can only be registered for once you pass your theory exam. I spent about 6-8 hours studying the material as I wanted to be sure to pass the first time. Luckily “there is an app for that” which prepared me well for the exam.

The test includes videos where the test taker is required to click on the screen when a hazard emerges. There is a five second gap during which you can click and the test taker is assigned points based on how early the hazard is identified. This part of the test was a bit crazy making for me as I never felt sure if something on the screen (car, pedestrian, cyclist) was considered a hazard or just a normal part of traffic. A car starting to pull out of a driveway may not initially be a hazard, but if they proceed to pull out in front of you, they are a hazard. But at what point is the determination made when the car changes from not a hazard to a hazard?  If you click too much you fail that section of the test. “Click the screen! but not too much! click now! no, now! not now! you clicked too much! don’t click on the cat!” Ahhh!

After I passed the written theory exam I began driving lessons. I spent about 2 months taking 1 lesson per week. The average is for students to take about 10 lessons so I’m perfectly average 🙂 Luckily I had a very good and chill driving instructor who Andrew and his co-worker, Robb, both recommended.

Here are main things I worked on:

The actual test was 40 minutes and included

In the weeks leading up to my test I learned that a maneuver could be attempted more than once. This made me feel like the test could be easily passed. But then I learned that doing the maneuvers correctly was not sufficient: every action must be done “in a safe manner”. This means always checking your blind spots and swiveling your head round and round like an owl to make “adequate” observations of emerging hazards. So not only do you need to execute maneuvers and drive around, you need to ensure you are always swiveling your head, which sounds easy but took practice for me to do consistently. For example, I was able to perfectly parallel park, but if I wasn’t checking my mirrors and blind spots while doing so, I would fail the test. :/

My instructor was very good at helping me to become more observant and swivel my head like a doll. There are lots of videos online with info about the test that helped me prepare but ultimately the test came down to staying calm and confident, but not too calm to the point of complacency. I had a lesson right before my test where I remember telling myself silently “don’t freak out” as I had drove over a curb and was getting too in my head about the test.

On test day I was pretty calm. I passed my mock exam and felt confident I could pass. Things went well with the exception of when I had to pass a cyclist: my confidence wained momentarily when I had to navigate oncoming traffic and the cyclist. I completely support sharing the road and love to ride my bike but this emergent situation was not something I had extensively practiced like every other aspect of the test. This is not something I would normally stress about but having the instructor evaluating me made me doubt myself. Skinny roads + cyclists + oncoming traffic = 🙁

In the end I passed with only one mistake! (You are allowed up to 15) My instructor was pretty sinking happy too and gave me a great big hug! It was such a relief to pass!

I remember my driving test at 15 being super easy and kind of a joke compared to the work that went into ensuring I passed in the UK. My high school offered driver’s ed and had a minimal cost compared to the hundreds of £s paid for the tests and driving lessons: the grand total was in excess of £500.

While I dreaded the lessons and the tests were stressful I’m glad I polished up my driving and learned how to navigate roundabouts with confidence.  I wish I would have taken a few lessons when I first moved here to clear up confusion, especially about the dreaded roundabouts. Being informed has made me more confident and the process taught me  good skills that I can practice in the UK and the US. And now I even know how to flip someone off in the UK! (It’s with 2 fingers!) (Not that I’m ever going to do that…hehe)

So glad to have that crossed off my list! Rachel’s Taxi Rides at your Service!

Here’s what my license looks like. Do you like my blonde hair? My license is good for 10 years although technically I’m supposed to relinquish it when I am no longer a resident but I’m definitely keeping it for my scrapbook! I earned it!

When I moved to Seattle in 2012, Andrew and I were not yet engaged and I struggled to find my place in the Emerald City.  A group of women living next door to Andrew’s Green Lake bachelor pad reached out to me and became fast friends. Out of that group a women’s bible study was born. This bible study later morphed into a book group held at a house in Queen Anne inhabited by some of those same women. This group of women became one of the most important communities of my Seattle life. Once a week we gathered for prayer, fellowship, laughter, tears and some zaniness. Sometimes we would even discuss a book. The group was a constant in my life. A safe place where honesty was always welcomed. 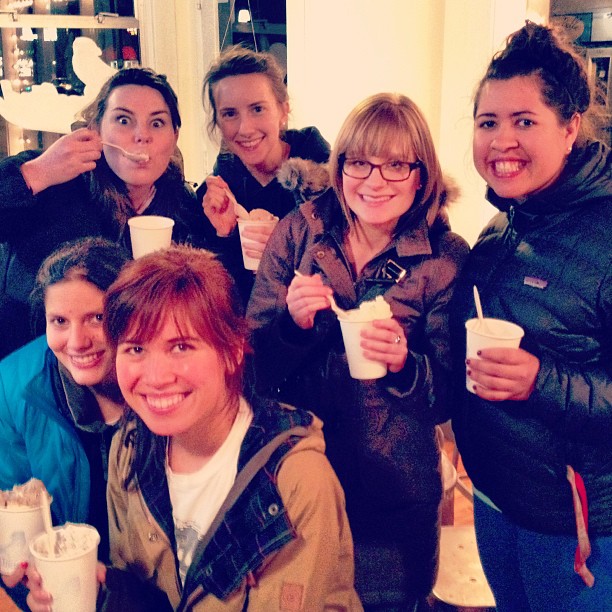 A few months ago the rent on their Queen Anne house was raised to an untenable level necessitating the relocation of said friends. While this is bitter, there is also sweetness, as one friend is moving out of state to pursue a dream and another just got engaged. These are happy things, and yet, I struggle: The band is breaking up (on good terms) and I am mourning the loss of a community hub. 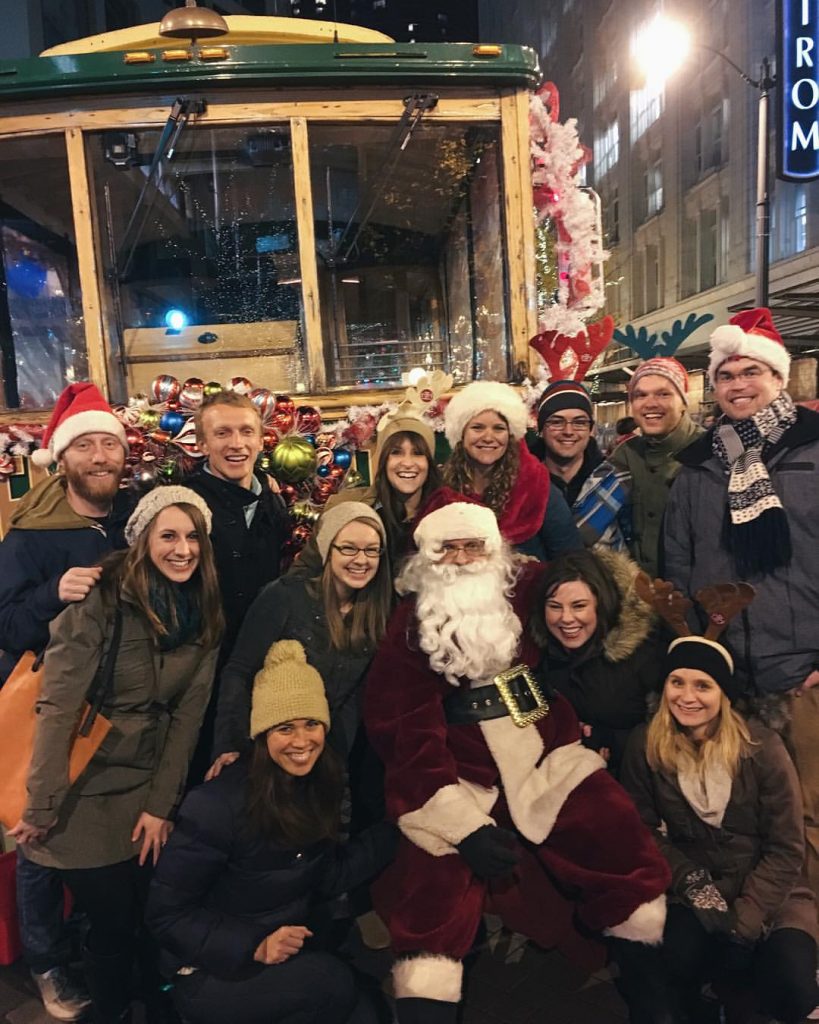 The houses inhabited by these women were the location for general hang-outs, celebrations, movie binges, house parties, low-key and fancy dinners, and general merry making. The number of friendships and romances that were born and tended in these houses is a credit to my friends. I want to emulate the way they prioritized community and hospitality. In these houses our community had a place to land and was always welcome. What will I come back to? Will there be a house where we all gather? Do I have a part to play? 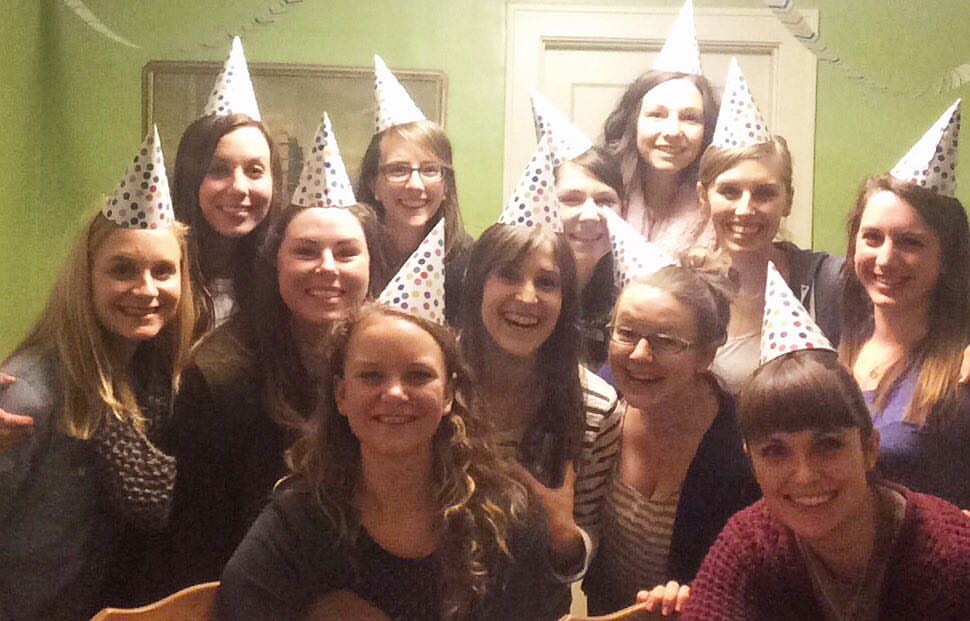 While I couldn’t have verbalized this a year ago, I realize now I had the idea that I would return to a Seattle untouched by time. Like Sleeping Beauty, I believed that I could enter a state of altered reality and  the world would do the same, waiting for me. The reality is that friends are buying houses, getting engaged, married and having kids. A golden era may be ending.

Lately, I’ve really come to embrace what I call the “greyness of life” in which two, seemingly opposite things are true simultaneously. I can be wonderfully happy in my present circumstance, while also being sad that something beautiful is ending, changing and shifting. “How am I?” “I’m happy AND I’m sad.”

In my brain, I know that something new and equally delightful may come into my life or a new iteration of that community life may emerge. But right now, in my heart, I’m sad. I am surprised and sad to realize that something I thought of as a constant will no longer look the same when I return. It makes me feel a little naive and a bit vulnerable to admit.. But that’s where I am. And I’m going to sit with my sadness for a while.

Life changes and people move on, but I’m not quite ready to do that yet. ~