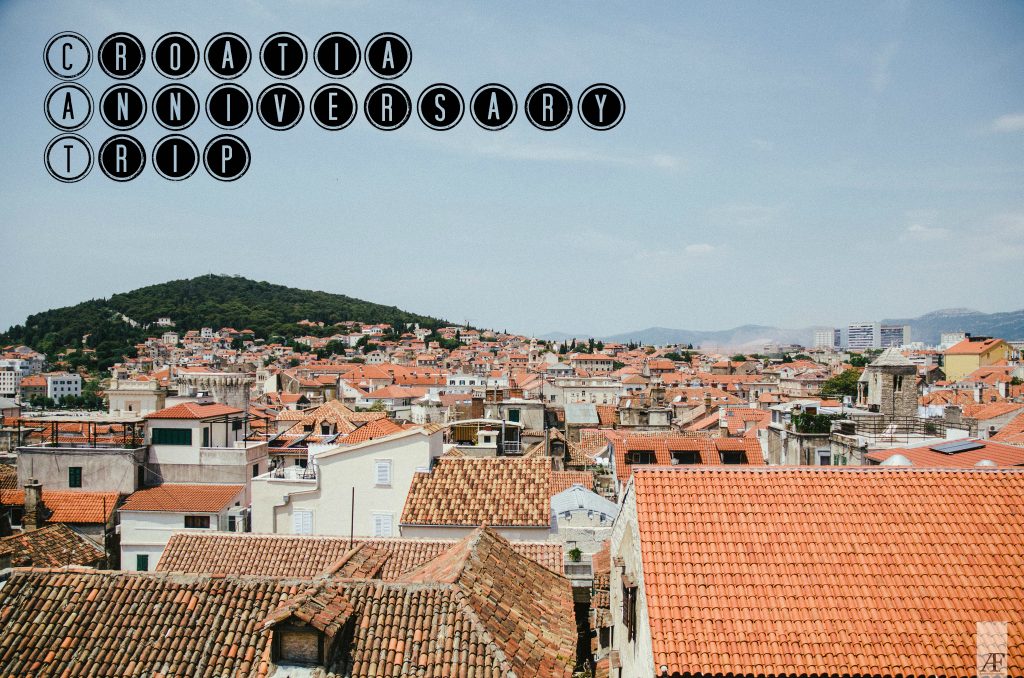 For our anniversary, or as we call it, our annual honeymoon, we flew to Croatia. Like Luxembourg, Croatia wasn’t on my radar, but Andrew suggested it so I was game. There were two main draws for Split: 1) it lies on the coast= beaches and 2) the Diocletian’s Palace, a UNESCO world heritage site. 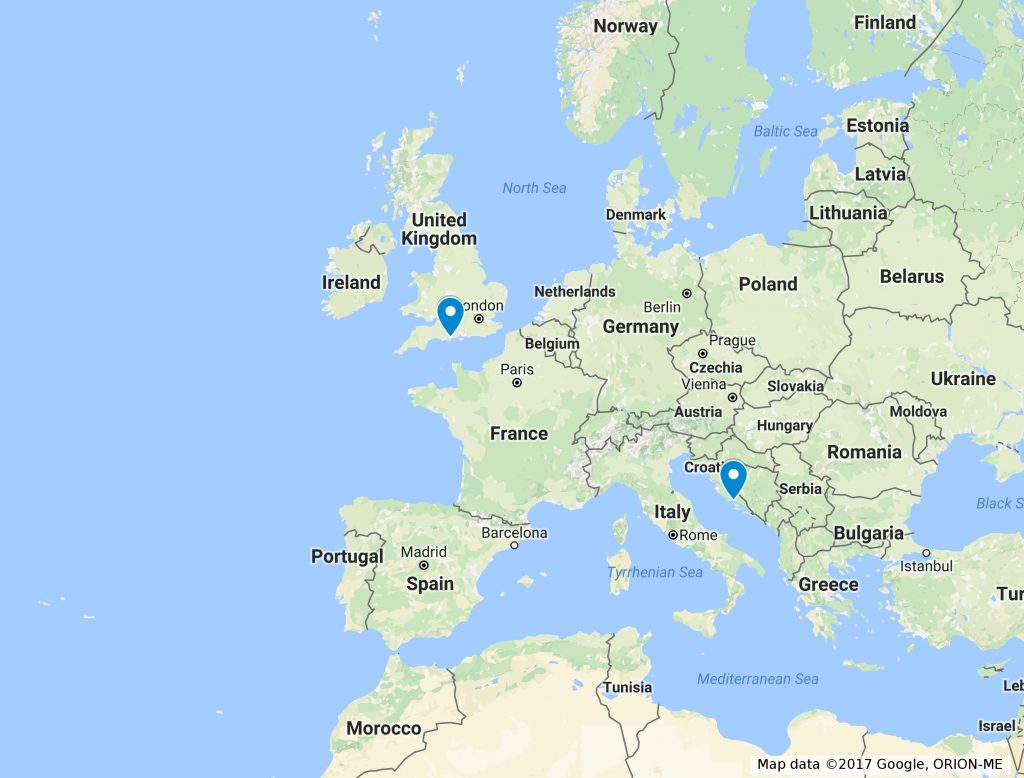 The palace is the only UNESCO site that is active: approximately 3,000 people live within the palace walls upper levels while the the ground level is occupied by vendors and restaurants. 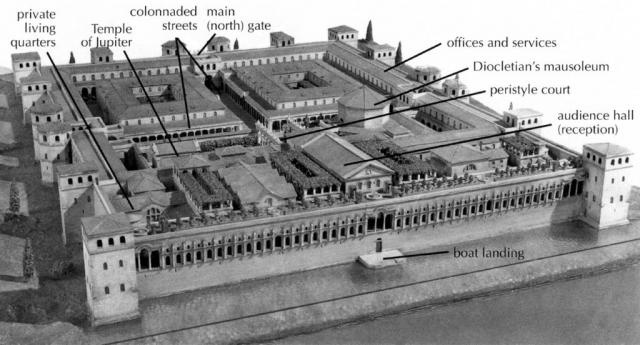 Diocletian’s Palace is an ancient palace built for the Roman Emperor Diocletian at the turn of the fourth century AD, that today forms about half the old town of Split, Croatia. While it is referred to as a “palace” because of its intended use as the retirement residence of Diocletian, the term can be misleading as the structure is massive and more resembles a large fortress: about half of it was for Diocletian’s personal use, and the rest housed the military garrison.

The Palace is one of the most famous and complete architectural and cultural features on the Croatian Adriatic coast. As the world’s most complete remains of a Roman palace, it holds an outstanding place in Mediterranean, European and world heritage.

Recently Split has experienced a boon of tourism due to the Game of Thrones (Season 4) filming that took place in the palace.

We ate! In fact we it feels like we did a lot of eating, as one does on vacation. We loved restaurants Perijov, Bokeria, Mazzgoon. We ate at a Pancake House called Stari Plac quite a few times- we just couldn’t get enough Nutella Crepes!

As we wandered around looking for dinner one night I noticed many people drinking what looked like fizzy orange booze . I sought out a bus boy to reveal the name of the secret drink and he happily obliged: Aperol Spritz. (Aperol is an Italian apéritif made of bitter orange, gentian, rhubarb, cinchona and other ingredients.) The drink is made of Aperol, Prosecco and soda. It wasn’t quite my cup of tea but I was glad to sate my curiosity.

We spent a lot of time exploring the palace and walking through town. There were many restaurants and shops inside.

There was a garden in a square near our Airbnb that was home for a half dozen or so stray cats. Ever time we walked back to our Airbnb we made a game of counting the cats. The restaurants in the square would put out food for the cats. I image they have a pretty good life dozing in the sun and being fed by the kind restauranteurs and tourist.

On the 13th while we were walking around the vendor tents just outside the Palace walls I saw a lot of women carrying lilies. My curiosity could not be contained so I finally asked a local. She revealed that June 13th is St. Anthony’s Day. St. Anthony of Padua is the patron saint of lost things. He was known for his eloquent homilies.

The reason St. Anthony’s help is invoked for finding things lost or stolen is traced to an incident that occurred in Bologna. According to the story, Anthony had a book of psalms that was of some importance to him as it contained the notes and comments he had made to use in teaching his students. A novice who had decided to leave took the psalter with him. Prior to the invention of the printing press, any book was an item of value. Upon noticing it was missing, Anthony prayed it would be found or returned. The thief was moved to restore the book to Anthony and return to the Order. The stolen book is said to be preserved in the Franciscan friary in Bologna. (From Wikipedia)

Reading bout him made me wish I could jump in a time machine and meet him. The older I get the more  history interests me so those time-machine-moments happen more and more frequently. (Although we’ve been watching Doctor Who and I’m learning about all the dangers of time travel! haha)

We climbed the bell tower

We toured the Roman cellars

We walked down the coast

We took a day trip via boat to a town north of Split and swam in the rain.

Andrew went scuba diving and got his Advanced Scuba certificate so that he can go on deeper dives. A lot of the ship wrecks he wanted to see are deeper than we were certified for so he decided to take the opportunity to get certified. Unfortunately, I caught some kind of flu that made dizzy, weak and miserably uncomfortable so I had to sit this adventure out which was super sad since we’ve been scuba diving together in June 4 out of the last 5 years. So while Andrew scuba’ed I rested, read my British chick-lit and researched my new interest in bullet journaling on YouTube.

While there I did a bit of browsing the jewelry stands and found myself drawn to Turquoise rings. Last year I worked with a woman who wore a lot of Turquoise and coral jewelry and since seeing her pieces I was on the hunt for a Turquoise jewelry.

I found a ring I was particularly drawn to one at a vendor in the Palace Cellars. After hemming and hawing for a few days and doing some research online, I decided to bite the bullet. I told Andrew about my decision and we went to make the purchase. Lo and behold the ring was gone! It had been sold. I was bummed since it hadn’t been a quick decision as I’m trying to make smart purchases that I will love for years to come. I told Andrew I knew it was silly (first world problems) but I was sad that I’d missed the opportunity after giving it so much thought. He was a little bit crap at comforting me and when I addressed this he agreed which was an odd conversation and he even remarked “Yeah, I’m not being real empathetic”. When we got home that night he beckoned me to the bathroom to ask me a question. I talked to him for a minute before turning around to face the mirror. The ring I had agonized over was sitting on the mirror’s ledge! I was shocked. How had the ring gotten there?! He had created quite the roose. I don’t know why but I was so surprised I started crying. We had a good laugh and I was feeling very loved by his well orchestrated surprise. I think my love language is all five! (words of affirmation, quality time, receiving gifts, acts of service, physical touch)

At the tail end of our trip we rented a car to drive 3 hours north to the National Park in Croatia. Originally we weren’t planning on visiting the lakes but during our stay in Luxembourg our friends (the Lloyds) mentioned they were a must see. So north we drove. 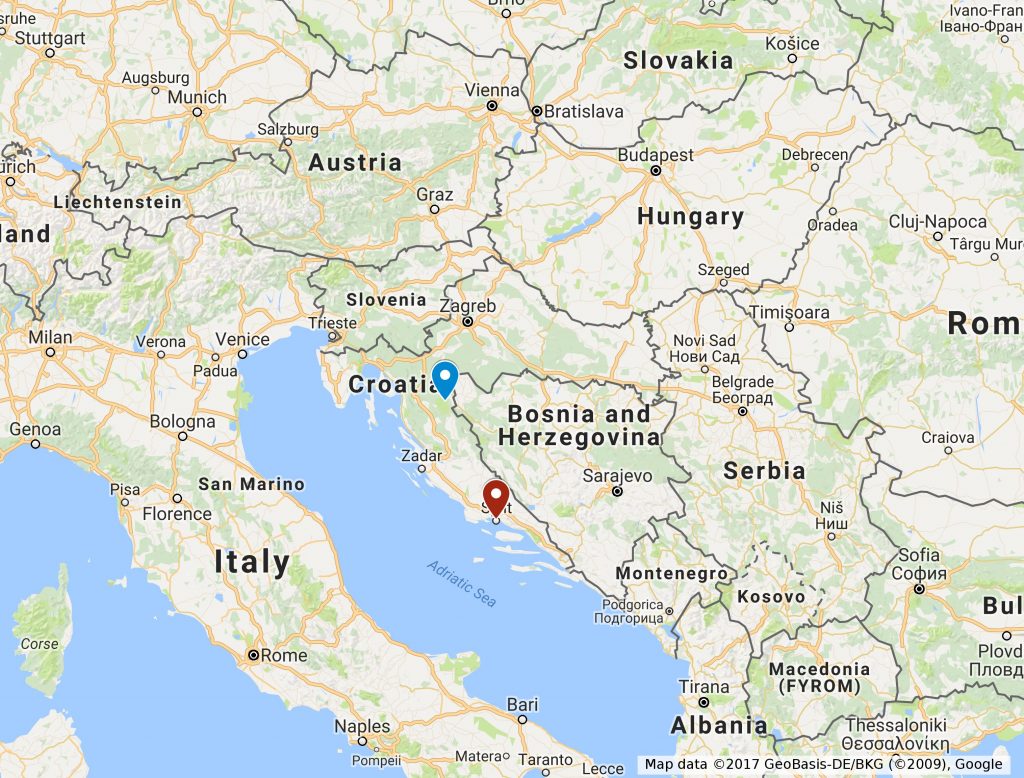 We got to the park at 8am to beat the crowds that bus in for day trips. The park was amazing, though that word does not do it justice. I felt like I was in a movie or a super surreal version of DisneyLand. While the pictures Andrew took are phenomenal, I just cannot describe how beatiful it was being surrounded by waterfalls,lakes, streams and running water. I’ve never been to the Grand Canyon or the Red Wood Forest (Bucket List!) but I imagine the Lakes are on par.

After six hours of me walking around with big eyes commenting to Andrew how dumb-struck I was, we returned to our Airbnb near the park. (We had taken one of the paths that led us from one end of the park to the other.) We laid down for a nap but were awoken by a hail storm. Our host was very panicked and Andrew came to the rescue, helping bail out water from the pond that had formed in front of her garage door.

The 83 year old lady living next door said she had not seen a storm like that in Croatia during her lifetime. Perhaps to our host’s annoyance, Andrew and I were like giddy school kids as we had seen these kind of storms growing up in Montana/Colorado/Seattle. We were very thankful we had left the park before the storm struck. I was imagining terrified groups of tourists running down the boardwalks to get back to lakes’ shores. I was also a bit bummed I had missed the insanity that I’m sure ensued, although it probably would have been very un-fun to hike back to the car in soaking wet shoes. We saw huge groups of Asian tourist many of whom were very nicely dressed with nice cameras so I hope they all weren’t too miserable. :/

You can view all of Andrew’s pictures on Flikr

I hadn’t realized prior to this trip that Rome and Split are on the same latitude. Croatia felt very much like what I had always imagined a Mediterranean locale to be. It was hot but not stiflingly so though the bar was forever raised after visiting Hong Kong during the summer of 2014.

We both enjoyed people watching during our trip and there were ample opportunities as we did a lot of walking and sitting at restaurants and on the prom. I really enjoyed taking note of the fashion trends.  I saw hardly anyone wearing jeans or jean shorts. (I brought jean shorts on the trip but ended up wearing my dresses or olive green shorts.) I did see a lot of white jeans and people dressed up somewhat during the day. Lots of adorable rompers, cold shoulder tops and lots of white. I don’t recall seeing flip flops which I’ve come to realize are a sure way to stick out as an American.  I saw a lot of platform sandals and rose metallic sandals.

While we were in Split we stayed close to homebase = our Airbnb. We are still finding a balance between relaxation and activity while on vacation, we both get antsy but at different times and in different ways. It was really great to have an Airbnb that was within walking distance to the palace and the beach, grocery store, and restaurants. We ate lots of gelato and had fun wandering around the palace. On our anniversary we like to reflect on our goals and figure out how we are working together on common goals.  We spent a lot of time sitting on the prom and talking about life and making goals for the future. Here’s to year 5 of marriage! (Tink!) 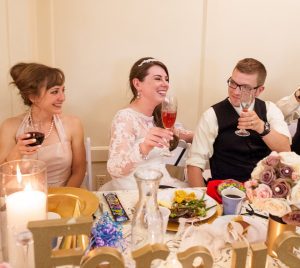